Sinner's rise is a small area featuring a flooded passage with strong enemies called Water Giants and exploding mummies. Finishing the Belfry Luna before attempting the boss here will give the player the opportunity to make the fight more accessible. 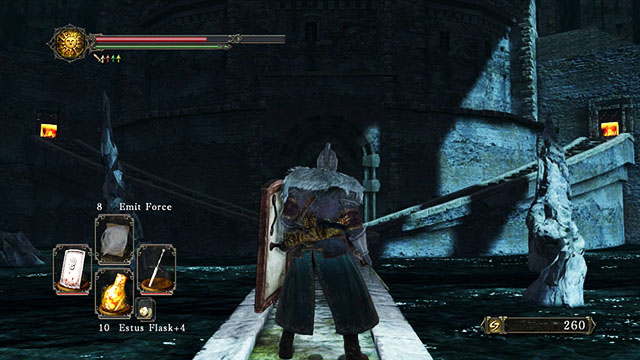 
On the upper levels of Lost Bastille, You will see a gate leading to a Mist Door. Open the gate and run along the path. Be cautious of the Archers on the wall above the Mist Door as they will shoot at you relentlessly.

Once you proceed through the mist you will see multiple enemies below you. You can use ranged attacks from here if you wish. However, be cautious as the enemies above you can drop down to your position. Once you are done here move along to the doorway on the right. Immediately to your right is a ladder leading up to the one and only BONFIRE in Sinners Rise, The Saltfort bonfire. To the right immediately after you climb the ladder is a doorway with a VERY small ledge which holds a Large Soul of a Lost Undead. Back at the bonfire proceed along the outer wall and take out the archers that were bothering you before.

From the Bonfire go back down the ladder and continue forward down the stairs, taking out any enemies at the bottom. Before entering the doorway to your left, move around the edge of the building to find a broken part of the stairs holding a corpse with a Human Effigy. Proceed into the building and you will now be on the ground level. This floor holds a few royal swordsman / archers. In the middle of the room you will see a lift which will bring you down. While riding the lift down, keep an eye out for a platform just before you reach the bottom in which you can fall on to. There is a corpse holding Lacerating Knife x 5 here. From this platform It is safe to jump off to the floor below.

You are now in a dark, water-filled dungeon area. There are a total of 3 Water Giants here and they hit hard. If you are in Human form, the NPC Lucatiel of Mirrah can be summoned. Her sign is behind the lift you just rode. Continue through the doorway and to your left the first Water Giant is present. Block his attacks and counter only when safe. An easy way to kill these Giants is to send the elevator back up after riding it down, opening a hole in the floor. Lure the Giants into the room one at a time. If you stand close to the hole in the floor, you can let the Giants get close enough to attack, then as they're attack run to the opposite side of the hole. Most of the time, the attack or the pursuit after the attack will cause the Giant to fall into the hole and die. Just be careful not to fall into the hole yourself.
Another easy way would be to lure the giants near the elevator platform, keep your shield up and strafe towards and away the giant. Eventually he will roll towards you and onto the platform, run up and step on the pressure plate to send him upwards. On his way up he will try to jump and nearly die landing on the walkway above you. He can't get down from here so either leave him or shoot him with a few arrows.
Surprisingly enough this enemy can be back-stabbed although I wouldn't recommend trying. In the alcove he came from is a corpse holding Sublime Bone Dust . After defeating him go to your right and enter the empty alcove. Another Water Giant can break through one of these walls so use caution. Located in the left corner of the back wall is a Hidden Door accessible by using Attack or Pressing "A" button (Xbox) "X" button (Playstation). This door leads to outside, and a quite watery death should you move too far forward. Instead look to your left and hug the wall to reach a corpse holding the Northern Ritual Band and a Bleed Stone . Returning from the alcove continue on and watch both your left and right for a Water Giant on each side. The right side alcove has a Large Soul of a Nameless Soldier Continue on and the alcoves will soon be holding Exploding Mummies. Soon you will reach a set of stairs on each side of you. Both lead to locked doors, one of which holds a Fire Seed. Unless you have the Bastille Key which can be found in Bellfry Luna you cannot open these doors. All the way at the end of this watery area is a large gate. Move towards it while clearing each room of Mummies. The room on the left before the gate contains a corpse with a Pharros' Lockston e and a Soul of a Proud Knight. Return to the gate and activate the switch located to the right to raise it. Remember when I said to clear the rooms of mummies? If you didn't all of them will rush to you as you raise the gate.

Once outside move straight ahead towards the Mist Door, which will lead to the Lost Sinner Boss battle. Before heading in, turn to the left and follow the narrow path between the stairs to reach a corpse with a Radiant Lifegem. A set of stairs lies both to your left and right. At the top of both stairs are locked gates. Again, if you have the Key you can open these. In each room you will find a line of oil which you can light with your torch. Lighting both rooms will provide light in the boss area RECOMMENDED. Also, the right hand stairway room holds a Smooth & Silky Stone. When you are ready, move through the Mist Door.

After defeating the Lost Sinner open the door on the opposite side of the room and move down the stairs towards the Primal Bonfire.
Before entering the room with the bonfire you will find a chest to your left which holds a Fragrant Branch Of Yore and an Elizabeth Mushroom . Light the bonfire to warp back to Majula.