Featured in the Dark Souls 2 reveal trailer surrounded by wyverns, mistakenly referred to as the castle of dragons. The bridge featured in the Dark Souls 2 reveal that is torn apart by a wyvern landing on it is in this area. If the player stands too long on the bridge, especially after the player destroys some eggs. Destroying more eggs reduces the time before a wyvern destroys the bridge while the player is on it. This place is accessed after beating the Guardian Dragon at the top of Aldia's Keep.
The Emerald Herald will relocate to this area to give the player an Aged feather, which can be used as a homeward bone unlimited times.
Important note for co-op teams: there is no boss in the Dragon Aerie or Dragon Shrine unless the player attacks the Ancient Dragon. Therefore you will only be able to see the signs of shades/phantoms until then. 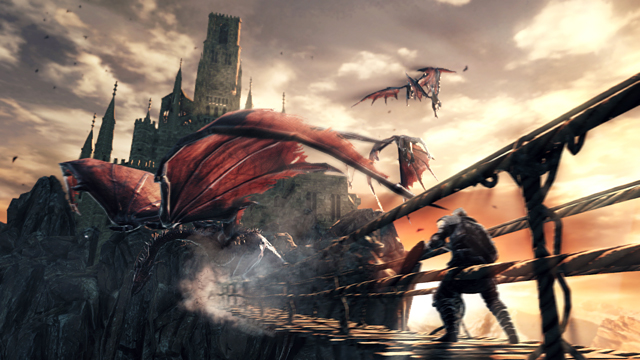 
As you enter the area, the path splits in two. Following to the right will lead you to a cliff side where The Emerald Herald will engage in dialogue, revealing that is was she that drew you into this world. The path to the left leads to a bridge with a bonfire at the other end. Exit from the opposite side and follow the winding path up to another bridge. A zombie with a glowing yellow chest is easily visible at the other end, and can be snipped very easily, avoiding the risk of getting blown off the bridge by his explosion.

Once across the bridge you will find yourself in a cave with two paths and a recess with a Crystal Lizard and a Radiant Lifegem. The path to the left leads out to a large area guarded by a red dragon. Dispatch the dragon and enter the area. Directly to the right, if you are fast enough is a Crystal Lizard, between some dragon eggs is a Dragon Tooth, a Darknight Stone sits on the edge of a hole in the floor. Kill the other Crystal Lizards and loot the corpses for a Soul of a Brave Warrior and a Bolt Stone. The holes in the floor will drop you back into the cave. To the right is a path leading up to another Crystal Lizard. To the far left is a bridge looping back round to the path from the right.

The path to the right (from the cave) leads to a bridge and another fork. At the end of the tunnel, you'll drop down to a walkway. To the right is a bridge leading to the previous open area, off the side of the bridge you'll notice a corpse with a glowing treasure. You can't access it yet, as you'll need to get to the zipline above it. Follow the bridge to the left, and watch out for the exploding zombie just around the corner. Cross the bridge to your right and follow the path up the side of the hill. Follow the path to the right and smash through the dragon eggs to collect a Petrified Dragon Bone. T he path splits to the left to a walkway revealing another open area with another Red Dragon, which can also be accessed from the left path. Entering the area will agro the dragon. You can snipe him from the lower part of the path, or engage in direct combat in the open area(in NG+ after killing the second dragon it dropped a petrified something). In the open area there are a couple of corpses, one holding a Soul of a Great Hero, the other a Large Soul of a Brave Warrior and another Crystal Lizard.

Again, there are two paths, the path to the right, leads to a ledge overlooking another Red Dragon that you can use to snipe him or attack him with spells. Once dispatched, drop down on the ledge to the left to loot the treasure, and down to the next ledge on the right for a Crystal Lizard.

Corpses in the area hold a Soul of a Great Hero, Ring of The Evil Eye +1, Firedrake Stone, Twinkling Titanite, Petrified Dragon Bone & Dragon Charm. A path to the left blocked by some dragon eggs (smash though them) leads back up to the area where the previous dragon was, to the right is a ledge that you can drop down to, to obtain a Large Soul of a Brave Warrior and a Pharros Lockstone. Homeward Bone back the Bonfire and retrace your step to get back to the main path.

Back on the main path, cross the bridge. Immediately to the left is a zipline leading back to the Bonfire and to the right a bridge leading to the castle.

Take the zipline and hug the path to the right to find a hole in the ground with a ladder leading down to the Bonfire. It's the same Bonfire as earlier, so climb back up the ladder to get back on the correct path. Just past the zipline drop down to a ledge to grab a Twinkling Titanite. Homeward Bone back to the Bonfire. Climb back up the ladder and take the zipline across the the castle. Remember the treasure on the pillar you could see from the bridge earlier? Glide across the zipline and press circle (Playstation) to drop off and grab a Soul of a Great Hero. Homeward Bone or drop of the edge to warp back to the Bonfire. Climb back up the ladder, across the zipline and the long bridge to Dragon Shrine.(As a phantom, I had one host tarry on the long bridge, only to have a drake swoop down, killing him and destroying the bridge. I tried this but nothing ever happened, so perhaps it is a rare event or after using a Bonfire Ascetic-Yarxov. It's not related to Ascetics, it happened to me on my first time on the bridge. I went into my inventory for a while, so it's probably got to do with time.)(Edit- Apparently if you break enough dragon eggs this happens, confirmation needed.)