Aldia's Keep is a castle ruin with ample grounds. Here you will find several interesting enemies and lore hints, as well as an important imprisoned NPC who grants a quest. 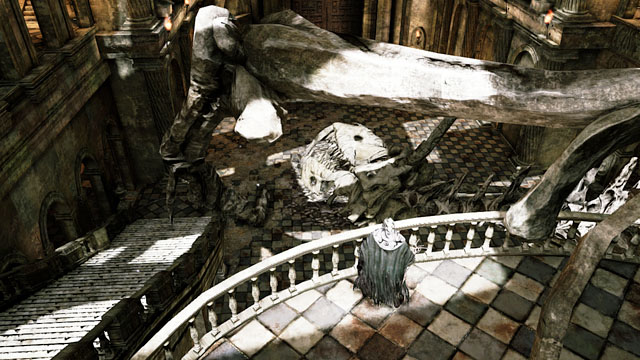 1) As you enter through the Shaded Woods door (after producing the symbol of the King by wearing the King's Ring) on left is a corpse with Soul of a Nameless Soldier and Petrified Dragon Bone. To the right behind stairs in corner, is a corpse with Fire Seed. Another corpse near the tall grass has Poison Throwing Knife x10. There is a roaming pack of dogs in the tall grass that inflict bleed and petrification. In the grass is a corpse in with Alluring Skull x3. If you follow the ridge to the left you come across a mimic chest. Attack it and kill it to get Sunset Staff and Dark Mask. In a little wooden hut nearby is a bonfire.

2) Go up the stairs and drop into the fountain to loot corpse with Radiant Lifegem x1. Continue up the stairs and go the left corner of the building’s doorway. Loot the corpse with Twilight Herb x1. Walk into the building which triggers the invasion of the black phantom Aslatiel of Mirrah. After defeating Aslatiel, proceed through the next room and open the large doors.

3) Upon entering you are greeted by an impressive and imposing dragon’s skeleton. Coming closer triggers the skeleton to life, and it will lunge. Avoid the lunge and the skeleton crumbles on impact into nothingness. Loot the corpse on the ground for a Fading Soul x1.

4) Walk straight ahead and into the 3 archways. If you make a left you will encounter several messages on the ground imploring you to pull back. At the end of a hallway is a lever with another message saying Don’t You Dare! Warning: Pulling this lever to free Navlaan will cancel out a side quest and loot. If you do pull the lever, go back and down the opposite hallway where you meet the now free Royal Sorcerer Navlaan. He talks to you briefly and is available as a merchant.

5) Go up the stairs and to the right. At the top of the stairs make an immediate right where you encounter a chest with Great Magic Barrier. Go back down the hallway and you walk into a room of mirrors. 3 phantoms will break out of the mirrors and attack. A corpse in this room holds a Northern Ritual Ring +2 and a Petrified Dragon Bone. Back to the center of the the stairs go up where you encounter a petrified cyclops. You can opt to revive it with a Fragrant Branch of Yore. You can alternatively take the staircase to the left of the cyclops and go one level above where you see a giant basilisk in a cage. Attacking it makes it aggressive and it destroys its cage. It has a lot of hp so range sniping will help safely kill it. Killing it may yield a Magic Stone. A corpse in front of where it’s cage was holds Crimson Water x1. Go past it and down the opposite hallway to find an iron chest with Bonfire Ascetic x2. Return to where the basilisk was and walk through into the next room

6) A statue of a dragon greets you in the center of the room and behind it a shut door. Pull the lever which dangles from the dragon’s mouth to open the door into the next room. This also shuts the door you came in through so if you need to return back through, pull the lever again. In the next room there is a Pharros lockstone wall and a corpse with Radiant Lifegem x1. When you insert the Pharros Lockstone into the wall it illuminates the area by lighting the torches in the room. In front of you will be a cyclops trapped in a cage suspended in the air, you can walk past most caged enemies in this area. There are two acolytes lurking behind the paintings, and may choose to ambush you. They can also be be provoked by attacking the paintings.

7) At the end of the Hall the locked door will be breached by a troll; he can smash through the chained door on the left side of the hall which is locked (revealing a chest) and can break walls for you if you time it right. The troll can also free the caged monsters. To the left is a disposal pit leading to the acid cell below, this room has an acolyte in it. The disposal pit can be reached by taking a door on your left and going down from the lab prior to the troll bursting through the door. On the way down the stairs to the pit there is a secret in the left wall that reveals a new bonfire. Once down the stairs, you will reach the acid pit. It is recommended you kill these enemies using ranged attacks if possible, then remove all of your equipment to avoid corrosive damage in order to retrieve the items. Among the items will be a key which you can use to open a door on the right side of the original hallway that will let you get behind the troll. The Room has two Acolytes and a large spore bug, you can circle around it if you have to, but the acolytes have to be killed or they will follow you and alert the troll. A second troll will pull the same trick and burst through the wall as before. Royal Sorcerer Navlaan dark spirit will also invade here if you freed him earlier. Once you get past him it is a straight run to the fog gate and onto the Guardian Dragon.
Video Walkthrough here.